And alas, we reached our first stop where we planned on spending a few days: Zion National Park in southwest Utah.

Without a doubt, Zion is one of the most beautiful places I’ve ever had the luck to see in person. The colors of the mountains towering over you are a rich mix of red and white, that appears to shimmer in the sunlight. The red stone makes the green shrubs appear that much more vibrant, and all at once you feel like you’re living in a prehistoric America (“it just looks like a t-rex is hiding somewhere like in Jurassic Park” – Kyle, daily).

Up until the shuttle bus comes to take you to your trailhead, repeating the same set of pre-recorded narratives between each stop; and until you’re waiting in your car at the campsite line for 2 hours to reserve your spot; and up until you can hardly escape the crowds of families and tourists unable to walk in a clear direction it feels like you’re in a mall the week before Christmas.

Regardless, we set out to experience the National Parks and sadly, that is now just a part of the experience.

The Narrows is a very well known 8 mile round trip hike where you’re quite literally hiking against the current of the Virgin River (until you head back, that is). Given the heat of Zion in June, this hike is even more popular.

Quick sidenote: when I say it was hot, I mean it easily was upwards of 100 degrees. In the excitement of our first hike, I really did not hydrate well enough. I ended up leaving the hike half way and checking into the Zion Lodge Motel with a splitting migraine caused by heat exhaustion. All is fine and long story short, Kyle and I just weren’t made to live in the desert. 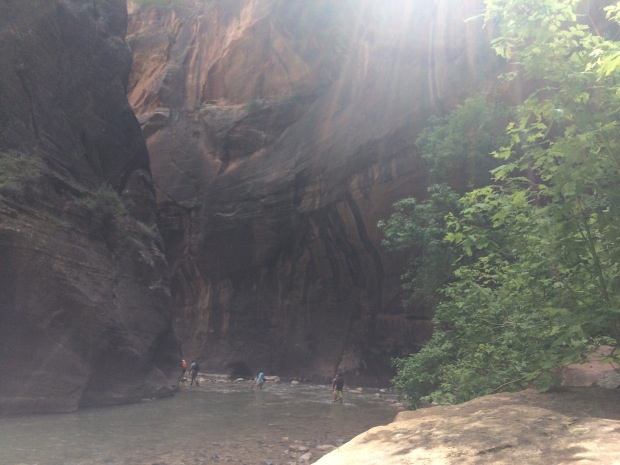 Given the heat exhaustion of day 1, I decided to take it easy the rest of the trip, cutting out Angels Landing and Observation Point for fear of heat and altitude getting the best of me.

With that being said, I absolutely loved hiking the Watchman. The trailhead is accessed right from our campground, and is a moderate hike with fantastic views. 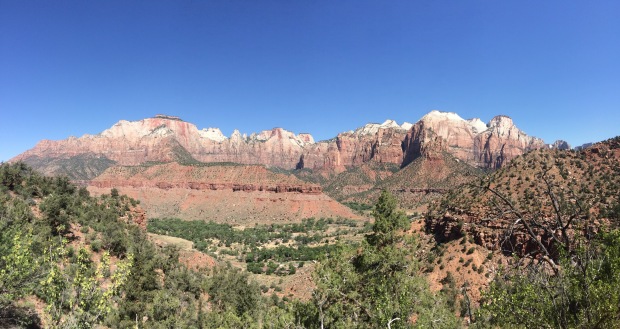 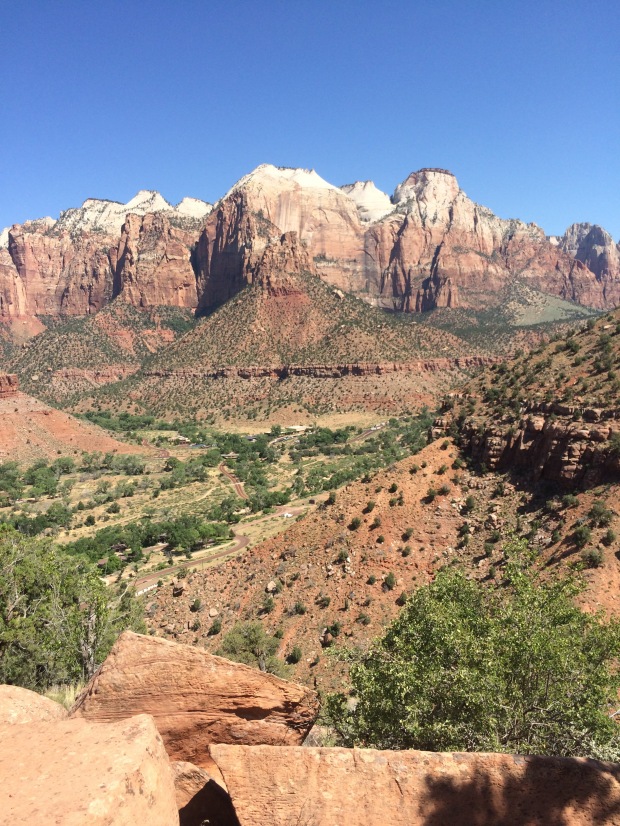 I also particularly enjoyed looking closer at the flora and fauna of this desert climate. I have to say, cacti flowers in full bloom are definitely my favorite of the bunch. 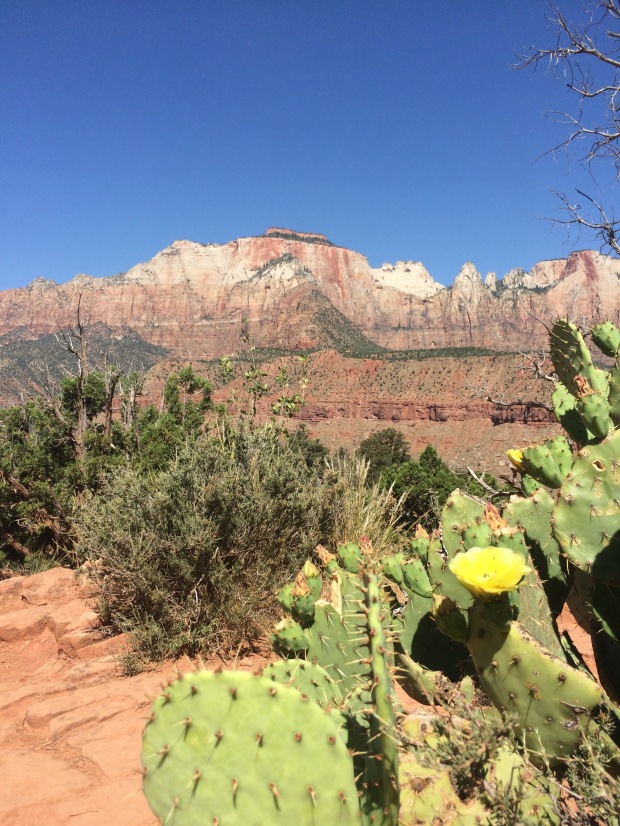 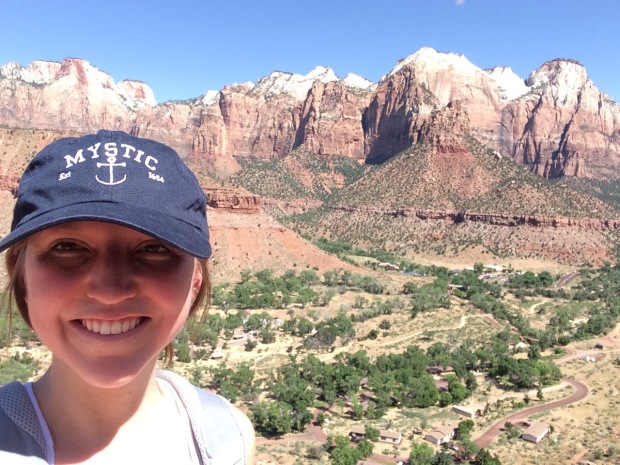 And finally, a view of the Watchman, the first peak from the town of Springdale at the main entrance of the park: 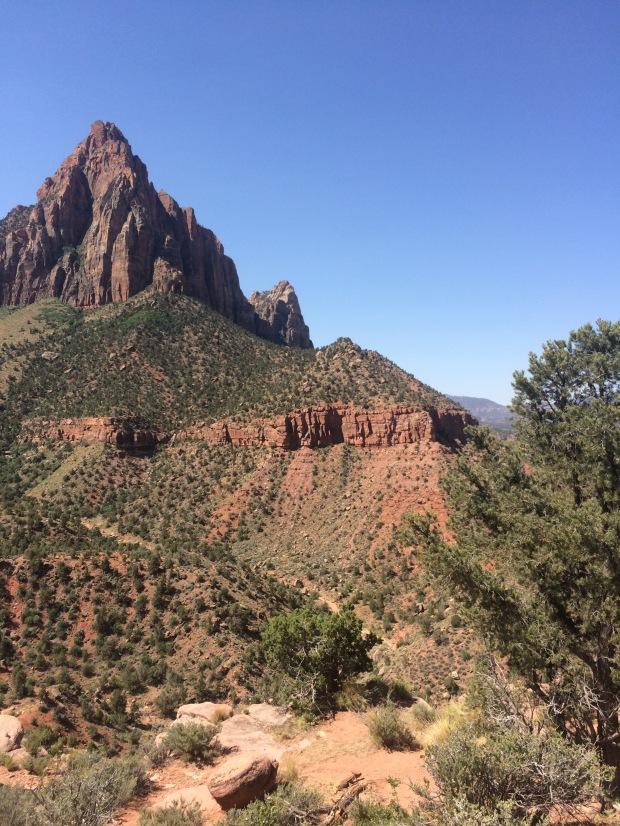 Because of the heat, we spent our afternoons by the river, staying cool and getting some downtime. Not too shabby. 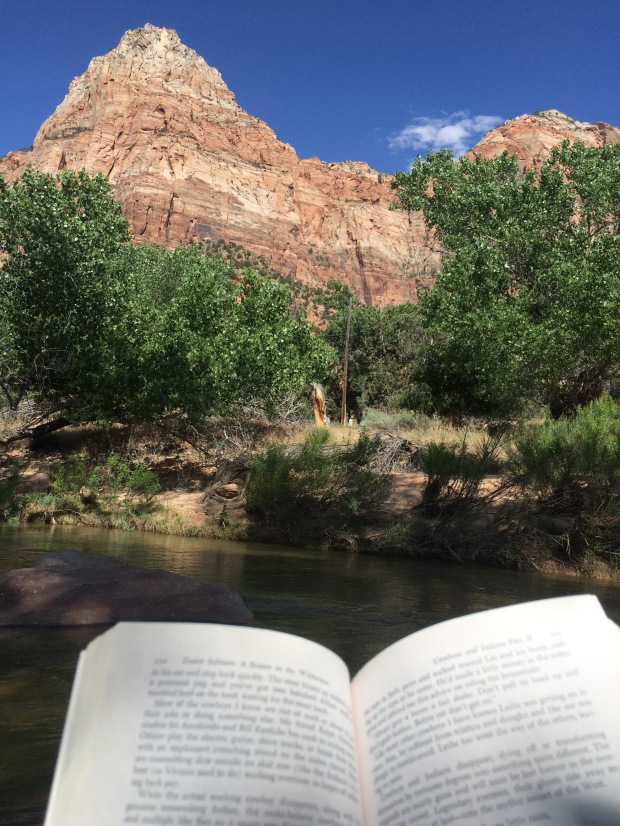 That evening, I made Kyle take another moderate hike with me. If I wasn’t going to do Angels Landing or Observation Point, I was at least going to do everything else.

First going to the lower emerald pool, the trickles of water down the canyon sides and naturally hanging gardens lure you in and invite you to stay awhile. 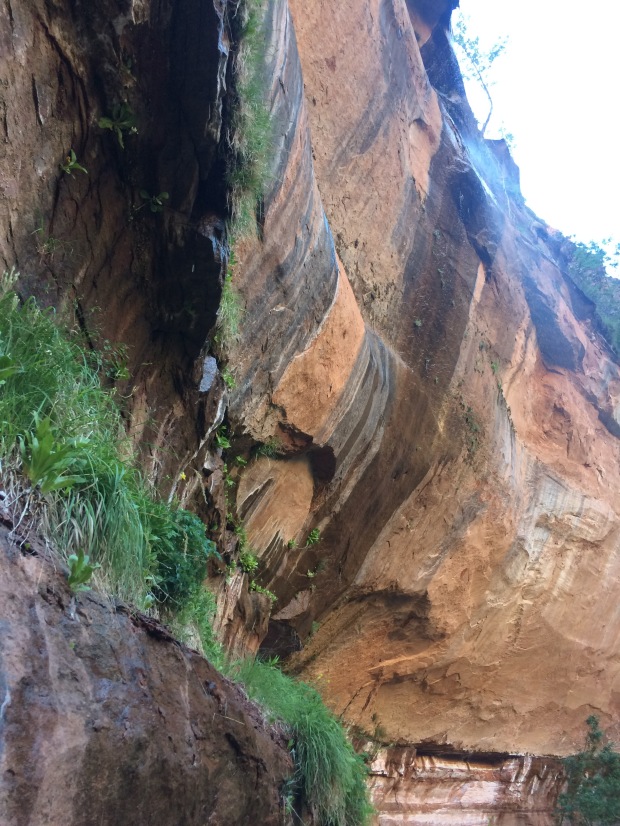 And finally reaching the upper pool, the most startling factor is the sound of the frogs, coming from every direction and echoing throughout the canyon. 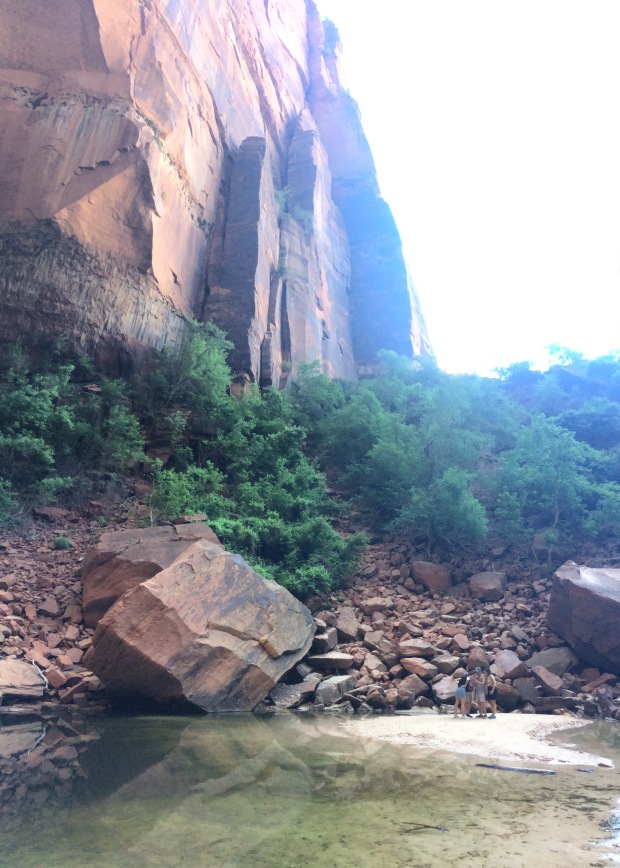 And hiking down, you get some pretty decent views of the mountains. 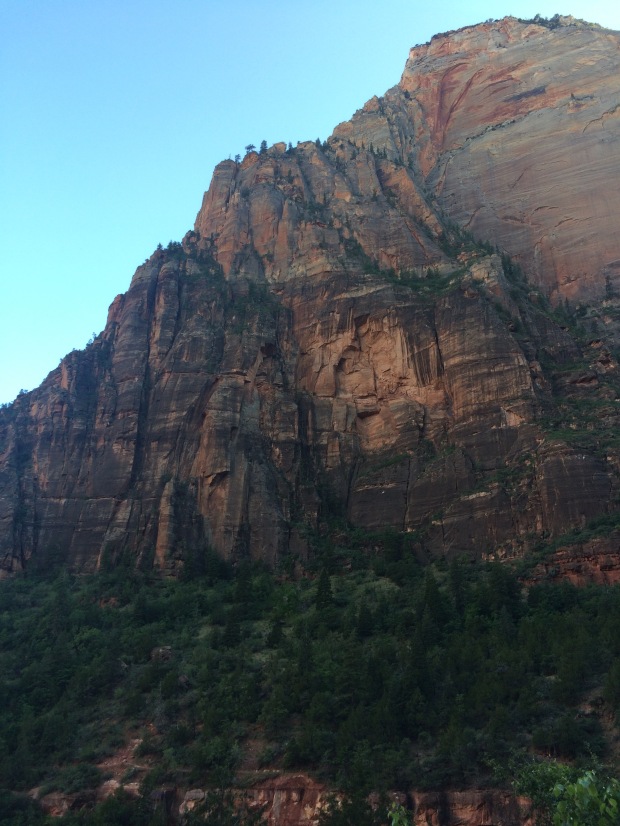 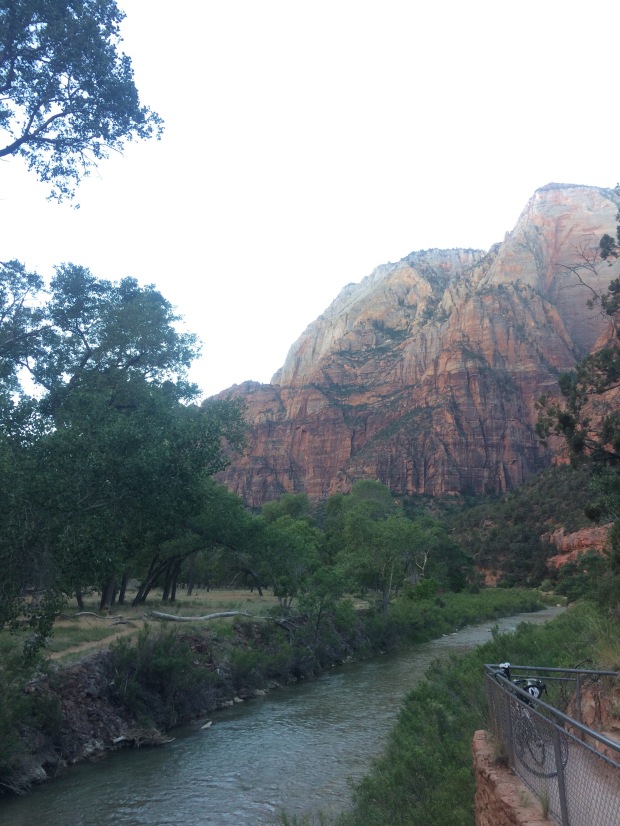 As previously noted, Kyle and I agreed not to do any more strenuous hikes after my heat exhaustion episode. But after doing two moderate hikes, I was just itching to get somewhere higher in the park. I looked at the differences between observation point and angels landing, and found angels landing to appear much less intense: half the elevation gain (1000 feet instead of 2000 feet) and a shorter distance (5 miles instead of 8). I didn’t have to beg and plead with Kyle for too long for him to agree; he also wanted redemption at Angel’s Landing.

Kyle actually had already come to Zion when he was a kid. He wanted to climb all the way to the top but considering the steep cliffs of both sides of the trail and the fact that he was like 10, his parents said no. (Spoiler alert: Kyle immediately texted his dad afterwards to tell him “told ya I could do it, Dad.)

So I take it slow, and even after a short while the views become spectacular. 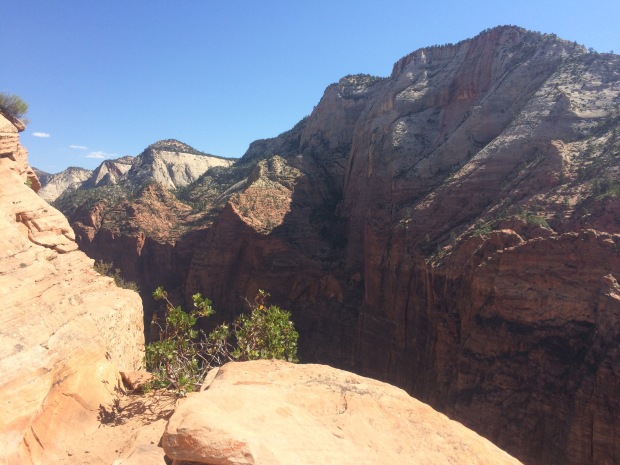 And then here it is, the infamous peak with drop offs on both sides. I hung back and Kyle climbed; I already got pretty high and this was some next level hiking. 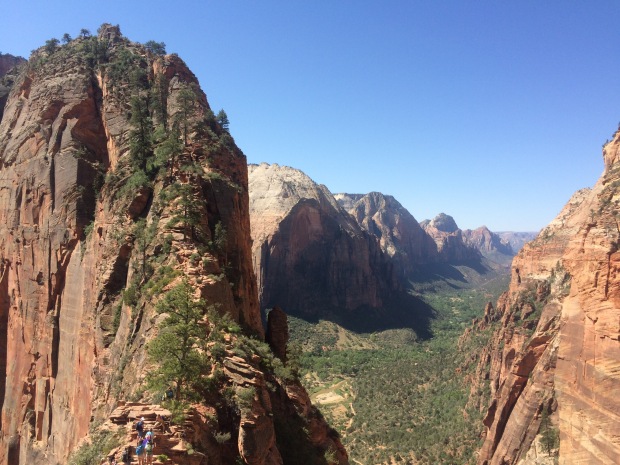 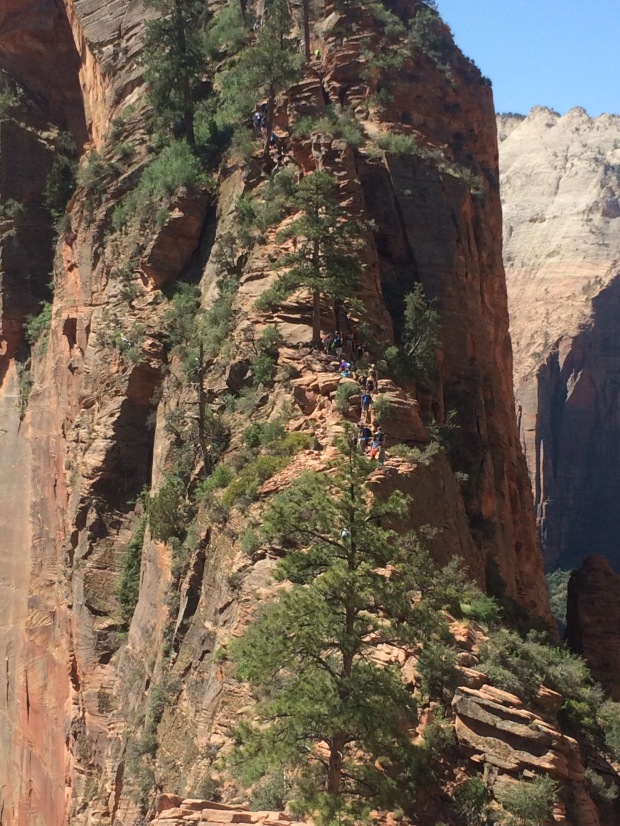 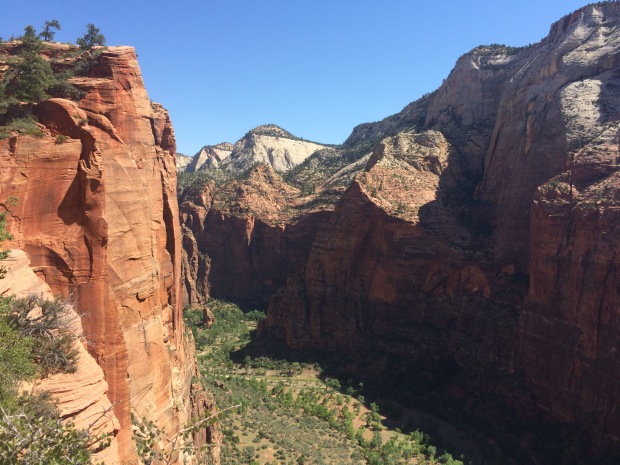 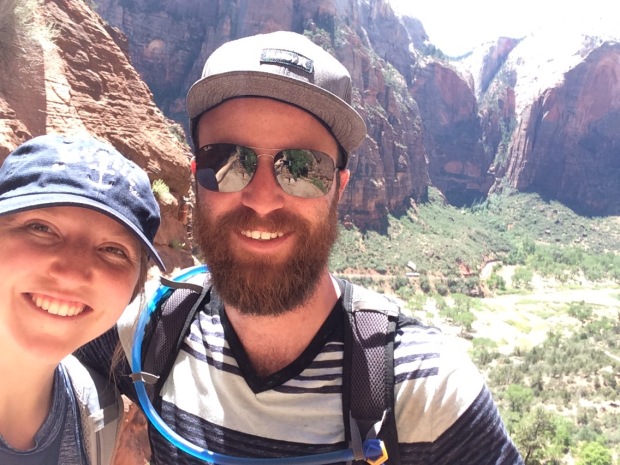